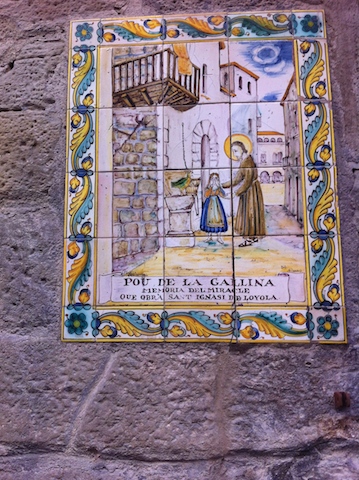 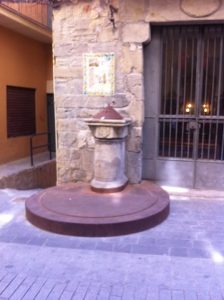 The Well of the Hen

Not far from La Cova Sant Ignasi in the old historic part of Manresa is the Well of the Hen, well marked and honoured as a place where St Ignatius performed a small miracle for a young girl of the town. The young girl was travelling to the market with a hen which was to be sold for family income. By some misfortune, the hen fell into the well, and the distraught child called on Ignatius to help her in her plight. Being from a poor family, the loss of the hen would have meant considerable hardship for her family.

Apparently there are 2 versions to the story – the first is that Ignatius was alive, and his prayers and actions saved the hen from the well. This is the story that is preserved on the plaque just near the well, and which is one of the pictures I have attached. The other story is that the young girl sought the intercession of St Ignatius in heaven and her prayers were answered by the saving of the hen from drowning in the well.

The pictures show the well of the hen, and the plaque which is just near it.